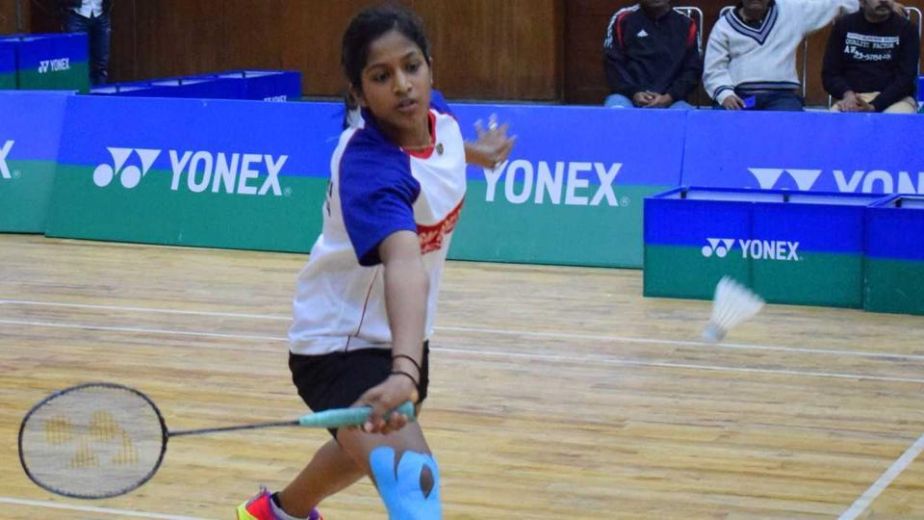 And the young pair is now focussing on returning with a medal from the upcoming major events, cracking the world's top 10 and qualifying for the Paris Olympics in two years time.

It has just been a little over 15 months that the two paired up but the duo has been like a house on fire, becoming the first women's pair to reach the All England semifinals, winning the Odisha Open Super 100 and reaching the finals of Syed Modi Super 300.

"Now the target is the CWG, Asian Games and Uber Cup and we also want to work hard and qualify for the 2024 Olympics," Treesa told PTI.

"Main thing is the Paris Olympics, so our aim is to be in top 10 by next year. That is the target." All of 18, Treesa hails from Cherupuzha, Kerala where the seeds of badminton were first sowed in her by her father Jolly Mathew, who is a physical education teacher.

"My father is a physical education teacher, so he wanted his kids also to play the sport. My elder sister (Maria) was my partner in under-15, under-17 in state events but I was performing better so my father motivated me to continue," Treesa said.

"When I started playing badminton, I realised that it gives me a lot of happiness. I remember watching Saina (Nehwal) at the Olympics, since then she has been my inspiration." Treesa, who started playing the sport as a six year old, said she joined the Gopichand academy just two months before the COVID-19 lockdowns were announced in 2020.

"I used to play singles and doubles but when I shifted to Gopichand academy in January 2020, Gayatri too had started playing doubles, so something clicked and we started playing together.

"But with lockdown, it was difficult as I had to go back home and we did the online sessions. In fact, Sudirman Cup and Uber Cup trials was the time when we played together and the first international event was at Poland." The duo had reached the finals of Polish International, won the Infosys Foundation International Challenge, before finishing second best at Welsh International.

But it was 2022 that the duo made a massive breakthrough with a runners-up finish at Lucknow and a top finish at Odisha.

However, the icing on the cake was their performance at the All England Championships.

"We were playing All England for the first time and there was no pressure, we were just playing freely and so we could give our best. It was such a great moment, as there was no expectations," Treesa said.

The Kerela shuttler knows expectations will be high from here on and she says it will be all about "adjusting to the pressure" and finding a way to "give our best".

The duo's court work has also been neatly divided with Treesa mending the back court as Gayatri manages the net.

"I am a attacking player, I am confident of attacking and to play at the back court with my smashes, Gayatri plays both, but she is good at net.

"It is different, when you play against the foreign players like the Chinese or Europeans. You need to be fitter and have more patience.

"The Japanese play 40-50 strokes in a rally, so we have to be of the same level. We need to be more patient to be in the rallies and also working mentally on the game.

"We have to adjust to the different style of games. I think we are comfortable with fast paced games and we need to work on playing the rally game," she signed off. 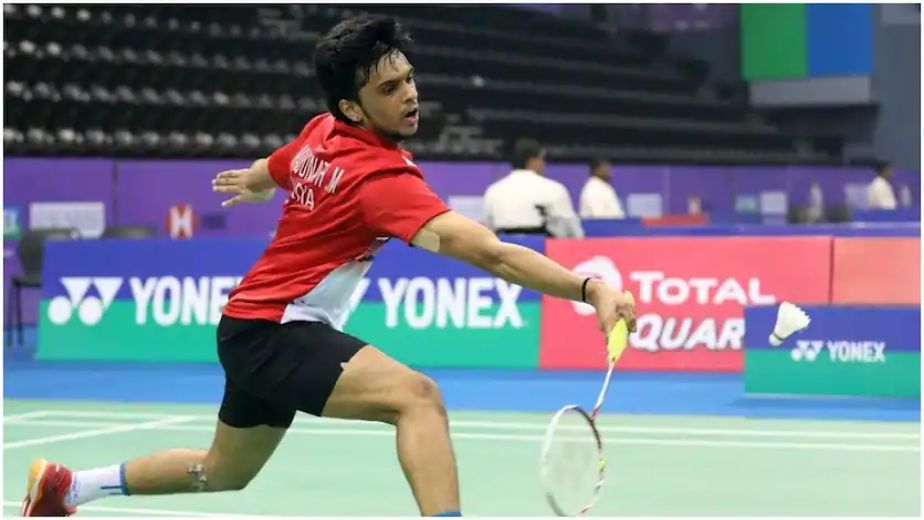 It was Majunath's maiden Super 100 final. He is a product of the Prakash Padukone Badminton Academy.

The unseeded Indian had been impressive throughout the tournament, stunning world No. 22 Hans-Kristian Solberg Vittinghus of Denmark in the quarterfinals.

The shuttler from Bengaluru was rated highly during his junior days and he also had one or two odd performances in the circuit like reaching the quarters at 2018 Czech Open and back-to-back semi-finals finishes at Vietnam Open and Russian Open in 2018.

During the COVID-19 pandemic, he decided to work hard on his fitness, something which has helped him to stay longer in the rallies and outlast his opponents in the three-game contests.

He had reached the semifinals of Infosys foundation India International in October last year.

He was one of the players who had withdrawn from the India Open Super 500 event ahead of his second round match against India's H S Prannoy after testing positive for COVID-19.

However, he made a good comeback, reaching the last four at Lucknow and the quarters in Odisha in January.

He was also part of the Indian team which competed at the Badminton Asia Team Championships in Malaysia. 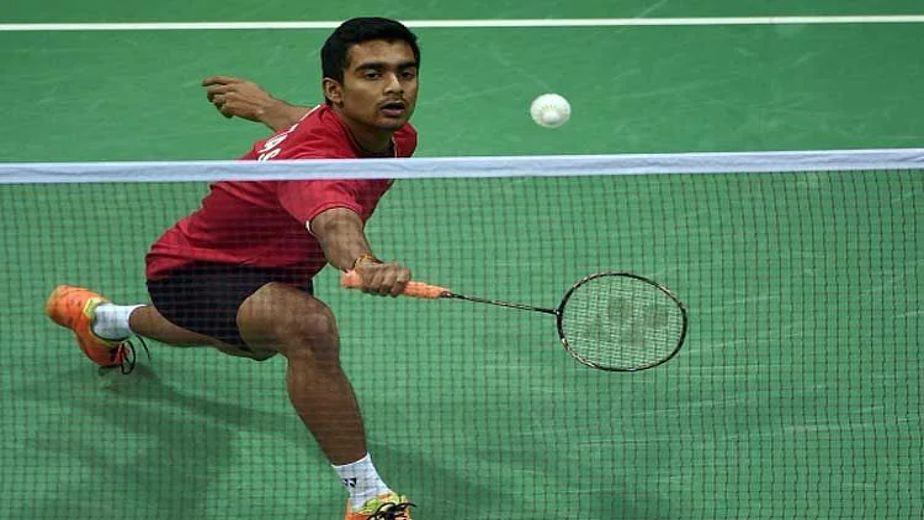 Orleans (France), Apr 3 (Badminton News) India's Mithun Manjunath made it to his maiden Super 100 final with a straight-game win over Indonesia's Christian Adinata at the Orleans Masters badminton tournament here.

The 23-year-old, a product of the Prakash Padukone Badminton academy, Manjunath prevailed 21-18 21-14 over Adinata in a 47-minute showdown at the Palais des Sports here late on Saturday night.

The world No. 79, who had reached the semi-finals of Syed Modi International Super 300 event and quarterfinals of Odisha Super 100 in January, will next face fourth seeded local hope Toma Junior Popov, who is ranked world No. 32, in the summit clash.

It was a tight battle with Manjunath and Adinata moving neck and neck initially before the Indian managed to go three-points up at the interval. However, the Indonesian came back to level the scores at 16-16.

Manjunath then stepped up his game and grabbed five points on the trot to earn the bragging rights.

The second game also started on an equal footing but Manjunath managed to lead 11-9 at the break and then kept his nose ahead to eventually seal the contest in 47 minutes.

In other results, women's doubles pair of Ashwini Bhat K. and Shikha Gautam put up a gallant fight before going down 16-21, 21-18, 22-24 to Germany's Stine Kuspert and Emma Moszczynski in the semifinals.

Manjunath has been impressive throughout the tournament as he stunned world No. 22 Hans-Kristian Solberg Vittinghus of Denmark in the quarterfinals to keep the Indian flag fluttering following the early exit of top seed B Sai Praneeth.

The shuttler from Bengaluru was rated highly during his junior days and he also had one or two odd performances in the circuit like reaching the quarters at 2018 Czech Open and back-to-back semi-finals finishes at Vietnam Open and Russian Open in 2018.

However, it was during the COVID-19 pandemic that he decided to work hard on his fitness, something which has helped him to stay longer in the rallies and outlast his opponents in the three-game contests.

He had reached the semi-finals of Infosys foundation India International in October last year.

However, COVID-19 disrupted his plans as he was one of the players who was withdrawn from the India Open Super 500 event ahead of his second round match against India's H S Prannoy after testing positive for the virus.

He, however, reached the last four at Lucknow and the quarters in Odisha in January. He was also part of the Indian team which competed at the Badminton Asia Team Championships in Malaysia. 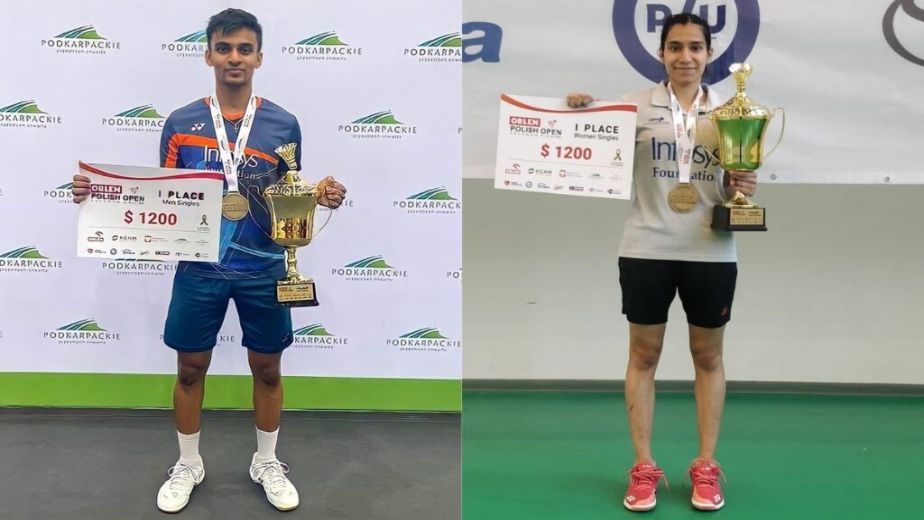 George, a defending champion, retained the title after defeating Chia Hao Lee of Chinese Taipei 21-15 21-14 in the summit clash, while Upadhyaya prevailed over fellow Indian Aditi Bhatt 17-21 21-14 21-17 in the women's singles final.

For George, it was his second title of the season, following her triumph at the Odisha Open Super 100 tournament in January. He had also made it to the Indian team for the Asian badminton team championships in February.

Bengaluru, Feb 11 (PTI) Infosys, the Australian Open's official digital innovation partner, said on Thursday this year it is applying technology to enhance tennis experiences forthose onsite and those unable toattendinperson. Using digital as an equaliser to bridge the physical gap, Infosys and Tennis Australia are opening up new possibilities by leveraging cloud, AI, 3D virtual experiences and mobility, the Bengaluru-headquartered India's second largest IT services company said in a statement. "The innovations are envisioned to alter the sporting normal well beyond the current Grand Slam and represent a shift towards placing digital at the core of the tournament to elevate immersion, passion, brilliance and experience for those on court and across the globe", it said. 3D Court Visionallows individuals to watch the ongoing tournament matches in an animated form, with data overlay for each shot. From speed to spin to serve placement, every detail of the game is available at a click of a button, the statement said. Infosys uses 'Hawk Eye' data to animate each shot in near real-time allowing fans to analyse the game from any vantage point in the stadium. A newAO (Australian Open) Virtual Slamexperience transports every fan into the Rod Laver Arena. 3D court views and data simulate the experience of playing at the AO, letting fans be a part of the action. In the dedicated AO player and coach app, theAI Video Analysisallows precise player and opponent assessment, be it the technique behind winning backhand drop shots or handling volleys in long rallies. For the AO media team,AI Shot of the Dayuses machine learning to rapidly identify match highlights, using multiple data points that are objective (such as fastest serve) and subjective (player emotion, crowd reaction and cruciality of the shot in context to the match). A 3DAO Virtual Hubhas been developed to overcome physical restrictions for partners and sponsors, who are integral to the AO business model. "The past year has accelerated the need for meaningful digital engagement between the Australian Open and its fans, players, coaches, partners and the media. Our focus this year is delivering new digital experiences and insights that are accessible for everyone involved, regardless of where they are currently located,"Ben Slack, Chief Revenue Officer, Tennis Australiasaid. "Having Infosys on board as our digital innovation partner for the third year running has allowed us to optimise engagement with all our stakeholders, not only our fans, players and coaches but our broadcast partners and sponsors as well," he said.
Read More