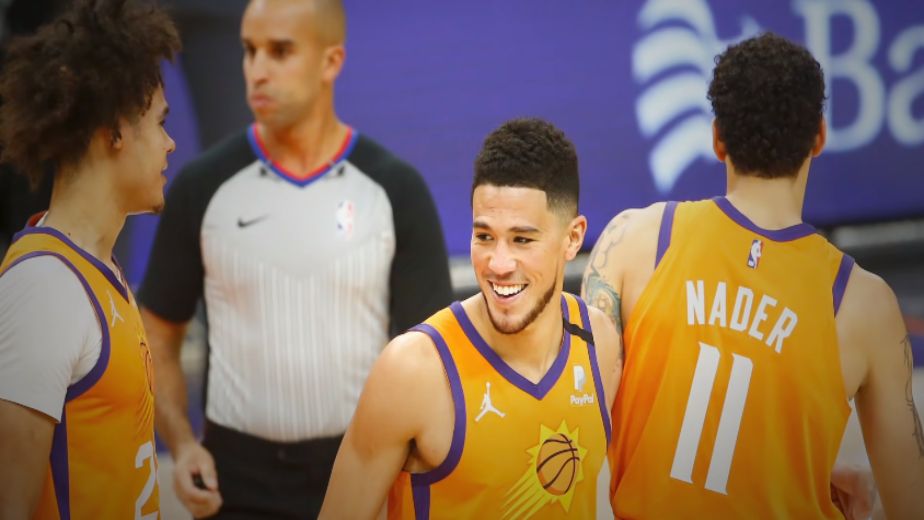 (Basketball news) The match between the Suns and Nuggets was a story of two halves, ultimately the Denver Nuggets came out on top as they used lockdown defence and clutch 3 point shots to start off their campaign with a 110-98 victory. Last year's MVP Nikola Jokic started off the campaign with 27 points and 13 rebounds on 13 of 22 shooting from the field as he was too much for the Suns defence to handle, on the other hand Mikal Bridges top scored with 16 points as Chris Paul and co couldn’t get themselves in a groove in the second half

Knicks edged out Celtics 138-134 after playing two overtimes, in what was an enthralling game between these two historical franchises. Evan Fournier in his first match for the New York Knicks scored a career high with 32 points and also hit the game winning three pointer with 56 seconds left in the second overtime. Earlier Jaylen Brown scored 46 points to inspire his team to make a comeback in the fourth quarter as they were down by 11 points, subsequently Brown broke the franchise record for the highest number of points scored on the opening night but ultimately his efforts went in vain as they lost by 4 points in the end. Last year’s most improved player Julius Randle top scored for the Knicks with 35 points, 9 assist and 8 rebounds to help inspire them to a historic victory.

The Chicago Bulls won 94-88 against the Detroit Pistons, this season the Bulls have made significant changes to their roster adding the likes of DeMar DeRozan and Lonzo Ball. These players made their debut and did not disappoint as they scored 17 and 12 points respectively but all the headlines were grabbed by their franchise cornerstone for years Zach Lavine who top scored with 34 points, 7 rebounds and 4 assist. Jerami Grant did his best to inspire a comeback but his 24 points wasn’t enough for them as the Bulls defeated the Pistons for the eight consecutive time.

In tomorrow's matches, the two next generation superstars Trae Young and Luka Doncic go head to head as Hawks take on the Mavericks. Last year's surprise package Hawks will be looking to continue from where they left off from last season as they made it to the Eastern Conference finals under coach Nate McMillan in his first full season. For the Mavericks they will be heading into a new era as coach Rick Carlisle will not be in there for the first time since the 2007-08 season as they have appointed former Dallas player Jason Kidd as their new head coach.

Also read: NBA: Lakers and Nets both lose their first match of the season as Giannis and Steph Curry both shine on the opening day.

The Miami Heat will play their first match against defending champions Milwaukee Bucks. The Heat will have a renewed vigour and passion to make this year's final after a disappointing season last year, this season Miami have added some extra firepower in the form of former NBA champion Kyle Lowry and also Victor Oldapio who was added to their roster last season will come back from a recurring injury. Miami mainstays Jimmy Butler and along with Bam Adebayo will be hoping that they inspire them to go all the way and win a NBA championship together. This season the Heats have been portrayed as the dark horse for the Championship by the former players and experts.

Last year's Western Conference Finalist LA Clippers will take on Steph Curry’s Golden State Warriors. The Warriors are coming off good form after beating the Lakers and will hope to repeat the same against their city rivals. For Clippers, the task in hand will be difficult as their talisman Kawhi Leonard will be out for quite some time as he suffered an ACL injury in the Western Conference Finals. All the onus will be on Paul George to lead the franchise before Kawhi Leonard comes back.

It was the first matchup between last year’s East finalists that ended in a nail biting finish, with Payton Pritchard’s putback two tenths of a second left sealing the win for Boston Celtics. Jayson Tayton scored 27 points and Jaylen Brown had 21 points in a matchup that saw Celtics wastefully let go of an early 17 point lead and a 10 point lead until the final minute, to eventually get the edge over Miami Heat. For Miami, Jimmy Butler had 26 points, Duncan Robinson got 16, Bam Adebayo with 15 and 14 from Goran Dragic. Miami Heat made an inspiring comeback to score 10 points in 55 seconds to tie the game, thanks to a pair of 3-pointers by Robinson and another one from Dragic. The Heat fell short at the end with Pritchard swooping in from a rebound with only two tenths of a second left on the clock. The Celtics made it difficult for themselves considering they made five 3-pointers in the first 5:45 to lead 21 - 9 and also held Miami to one field goal in the second quarter for eight minutes to lead by 17. It’s a testament to the spirit shown by Miami Heat players to cut the lead by eight by halftime and overturn the deficit by five in the third quarter. Both teams were tied at 80 with 12 minutes left on the clock thanks to Grant Williams putback in the final second of the third quarter.
Read More