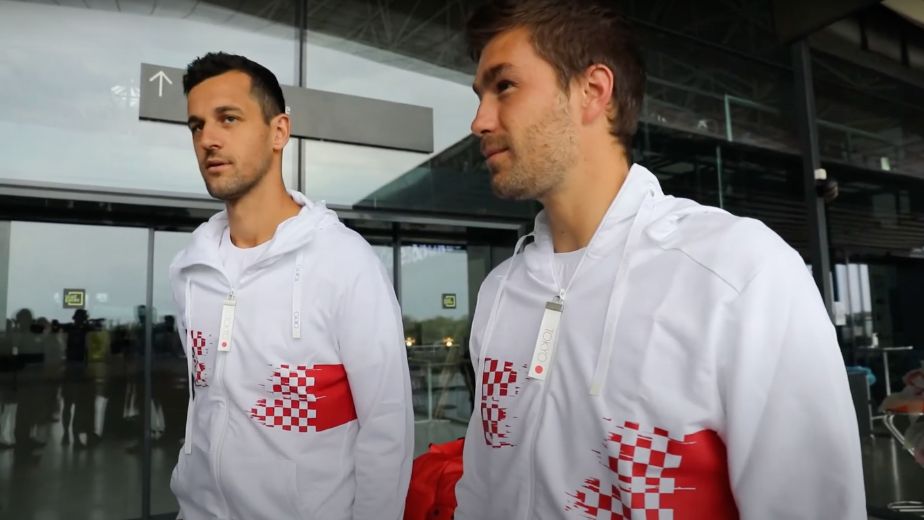 (Tennis news) Croatia became the first team this year to qualify for the semifinals of the Davis Cup as they beat Italy in a highly tense quarterfinal. Italy was expected to go through the last four but found trouble from the start as world number 279 Borna Gojo got the first point for Croatia with a win over Lorenzo Sonego who is ranked almost 250 places above him. Jannik Sinner kept the team alive with a three set win over Marin Cilic as the youngster played through the pressure and proved how much he has grown over the past few months.

In the final match, Croatia had the advantage as their doubles pair were the best in the world and they did what they were supposed to do. Nikola Mektic and Mate Pavic won the tie for Croatia and did not even face a breakpoint in the match. The loss in the first tie against Borna proved to be too costly for the Italians as their singles players were all top ranked and experienced. Croatia had the doubles tie sorted as it was the singles which were a concern but Borna turned it all round for the team. Croatia were the first unseeded nation to win the Davis Cup when they defeated Slovakia in 2005. Their second title came in 2018 when they defeated France and now they have a chance to win a third one.

Great Britain will face Germany in the next quarterfinals today. 10 time champions Britain are the favourites to progress into the semifinals as they have higher ranked singles and doubles players. Cameron Norrie and Daniel Evans will spearhead the singles team for Britain as Joe Salisbury and Neal Skupski will be looking to win the doubles tie. For the Germans, they have won the title three times and had lost at the same stage to the same team in 2018.  Jan-Lennard Struff is leading the singles tie along with Dominik Koepfer but their doubles pair did the trick against Austria as they won the final tie. The pair of Kevin Krawietz and Tim Puetz will once again try to push the team when they are up against a spirited opponent.

The expected score will be 3-0 or 2-1 for Britain but will be an upset if Germany scrapes through. Norrie is the highest ranked player in both the teams and his win will provide a good chance as their doubles pair are also the favourites. With Croatia's result against Italy now an upset in the singles will be a huge motivating factor for Krawietz and Puetz as Jan-Lennard or Dominik will have to pull off something sensational for the team to enter the last four. 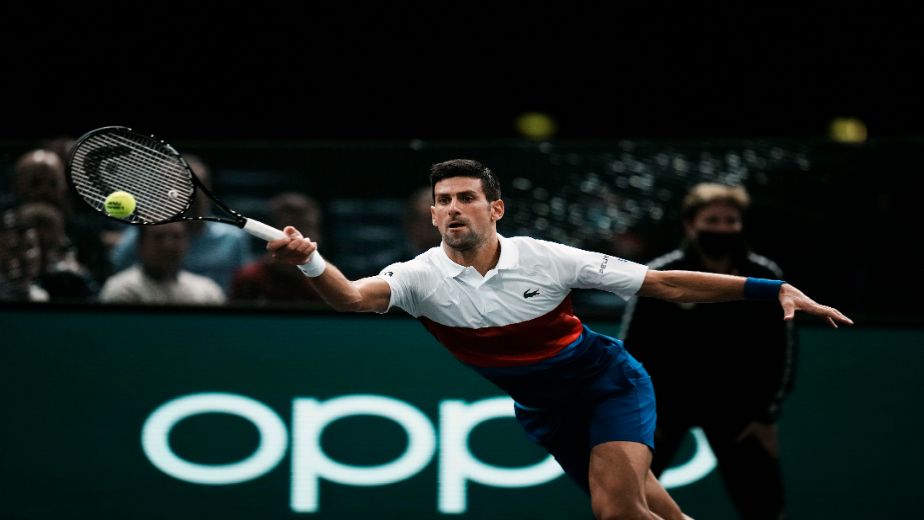 Novak Djokovic starts off with a victory at Paris, Gael Monfils steals the show in opening round

(Tennis news) Novak Djokovic made a winning return on tour with a three set win over Márton Fucsovics at the Paris Masters. Djokovic took no time to take an early lead as his strokes were looking strong as he took the first set, in the second set it was Marton’s chance to take the lead as he took some brave shots to take the set. In the final set, Djokovic broke early with a loud roar towards the crowd and broke him again as he won the match. The Serbian defeated Fucsovics 6-2, 4-6, 6-3.

“It was great to be back on the court after almost two months without competition,” Djokovic said. “I did not expect anything but I knew this was not going to be an easy match. Marton is a very talented player, he has a lot of quality. It was a great fight. I couldn’t break his serve, he was playing with a lot of precision and we pushed each other to the limit. It was a great opening match for me. I am very pleased.”

Casper Ruud shook off a rusty start in the opening set to beat this season’s ace leader Alexander Bublik. Ruud got a breakpoint in the fourth game with a well played defense as Bublik attempts went in vain but saved the breakpoint to win the game. Ruud took seven consecutive games to take the second set under half an hour and keep his chances of qualifying for the season finale alive. Ruud defeated Bublik 6-4, 6-0.

Gael Monfils' forehand was the winner in his match against Miomir Kecmanović as he kept firing winners which kept increasing by each set. Monfils hit a humongous forehand on his serve which was timed at 190km/ hour and in the match he hit a total of 54 winners as compared to 13 by Miomir Kecmanović. Monfils had a slow start but in the final two sets he simply swung the racquet as hard as he could to march on to the next round. Monfils defeated Kecmanović 4-6, 7-5, 6-3.

Carlos Alcaraz Garfia once again made good use of his endurance as he rallied on to beat Pierre-Hugues Herbert in a 39 game three set match. Both the players took at least five games in each set as two tie breaks were needed to settle the scores, Herbert used his serve and volley to win points as Carlos depended upon his baseline play. Carlos also showed off his quick reflex skills at the net as he had to come forward multiple times in the match and found answers to Herbert’s angled serves mixed with excellent half volleys. Carlos defeated Herbert 6-7(4-7), 7-6(7-2), 7-5.

“It’s not easy to play against a home player,” said Alcaraz. “I think we played at a good level and it was a great match, so I am happy to win. He has a great serve, so I had to return better and remain focused. I think that was the key. I am playing at a good level and I want to finish the year strong.

In men’s doubles, Joran Vliegen and Sander Gillé scored a straight victory over Máximo González and Simone Bolelli in their opening match at Paris. Joran and Sander defeated Maximo and Simone 7-6(7-2), 6-4. Joran and Sander had won the title at Singapore in the beginning of the season and were runners up at the BMW Open. They will next face top seeds Mate Pavić and Nikola Mektić in the round of 16, the pair had met them last time in the semifinals at Madrid where the top seeds won in straight sets.

Arthur Rinderknech and Benjamin Bonzi also recorded straight victories over Stefanos Tsitispas and Aisam-ul-Haq Qureshi. Qureshi had reached the quarterfinals in Moscow while partnering with Rohan Bopanna but this time he had to depart early. Arthur and Benjamin defeated Stefanos and Qureshi 7-6(7-3), 6-4. 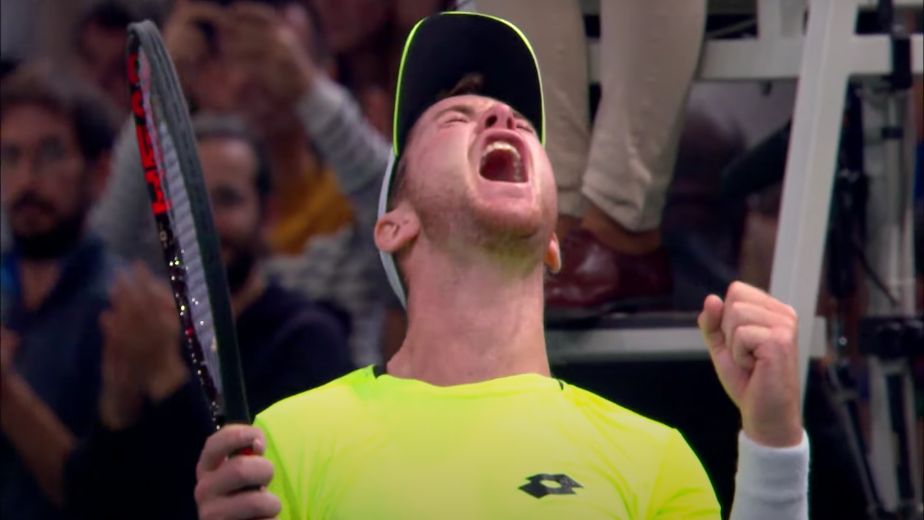 (Tennis news) Dominik Koepfer saved 7 match points on his way to victory against Andy Murray in the opening round of Paris Masters 1000. Koepfer got into the main draw as a lucky loser as Jenson Brooksby had to withdraw due to an injury, Koepfer made full use of the rare opportunity as he beat the 2016 champion in a 3 hour match. Murray had it in him but could not finish off the final points as Koepfer kept saving himself with last minute heroics. Koepfer defeated Andy Murray 6-4, 5-7, 7-6(11-9).

Sebastian Korda made sure Aslan Karatsev’s chances of qualifying for the year end championships came to an end as he delivered an opening round defeat for the Russian. Korda took the opening set in his debut appearance in Paris as he was looking at a straight set until Karatsev saved two match points and won the second set. The final set saw both baseline players taking it to tie break as Sebastian called the shots at the end to take the match. Korda defeated Karatsev 6-2, 6-7(9), 7-6(7-5).

Cameron Norrie kept his chances of qualifying for the season finale alive as he quickly closed out his opening match against another left hander Federico Delbonis. Norrie only took an hour and ten minutes while conceding only three games. The pair had met in the qualifying rounds two years earlier in Paris where Norrie defeated Delbonis 6-2, 6-1.

Márton Fucsovics rode off a three set win over Fabio Fognini which saw Fabio saving a match point in the second set. Marton started with a dominating first set as Fabio committed unforced errors and in the second set Fabio came back in form to take the match to the third set. In the final set, Marton hit an unbelievable banana shot to take the first point in the fifth game, Fognini was close to victory but couldn’t make it to the next round as Fucsovics will take on Novak Djokovic in the next round. Fucsovics defeated Fognini 6-1, 7-6(6-8), 7-6(7-5).

In men’s doubles, Djokovic returned to court with a victory as he partnered with Filip Krajinović to beat Luke Saville and Alex de Minaur. Djokovic last played at the US Open final where he lost to Daniil Medvedev, Djokovic and Krajinović defeated Luke and Minaur 4-6, 6-4, 10-7. The pair will next face 6th seeds Filip Polášek and John Peers in the next round.

Buenos Aires, Mar 4 (PTI) India's Sumit Nagal registered the biggest win of his career when he stunned second seed Cristian Garin of Chile in straight sets to enter the quarterfinals of the Argentina Open ATP 250 tournament here. Nagal, ranked 150, produced high-class tennis on Wednesday to register an impressive 6-4 6-3 second-round win over his Chilean rival, who has ranked way above at the 22nd spot in the ATP chart. Nagal will play Spain's Albert Ramos-Vinolas, in what will be the Indian's maiden quarterfinal appearance at the ATP Tour level. Ramos-Vinolas had defeated Dominik Koepfer of Germany 7-5 6-4.
Read More