NBA: Warriors extended their winning run as the Rockets hand the Brooklyn Nets a shock defeat 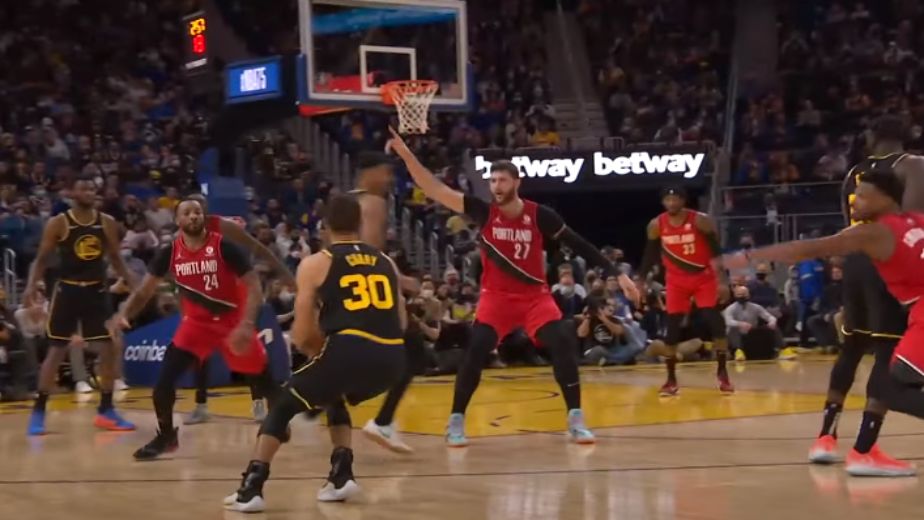 (Basketball news) The Golden State Warriors won their 21st match of the season with a 104-94 win over the Portland Trail Blazers. Curry scored 22 points and moved within nine 3s of tying Ray Allen's record, Steph Curry is closing in on Allen's mark of 2,973 regular-season 3s made from 1996-2014. Draymond Green had 10 rebounds, eight assists and five points, and Jordan Poole scored eight of his 20 points in the third quarter as Golden State started to pull away. Otto Porter Jr. contributed 15 points and six rebounds off the bench as the Warriors improved to 21-4. For the Trail Blazers Jusuf Nurkic had 12 points, 13 rebounds and six assists before fouling out late. Nassir Little scored 18 points for the Blazers, Norman Powell scored 26 points but went 1 for 7 from deep, and the Blazers made just 8 of 30 on 3-pointers as the Trail Blazers missed injured allstars Damian Lillard and CJ McCollum. With this result Warriors move to the top of the Western Conference.

''To make that many 3s in one game obviously has never been done before, so it was just a routine night,'' coach Steve Kerr said of the 16 Curry needed coming into the game to top Allen. ''He made six, which is nothing for him. I don't think I ever did that in my entire career one time.''

''I feel like it will be special no matter what because I'll make it special and it will be an amazing experience for me and my teammates,'' Curry said this week

The Brooklyn Nets suffered a shock 114-104 loss to the Houston Rockets, who subsequently are showing an uprise in form. Eric Gordon scored 21 points before being ejected in the fourth quarter and Garrison Mathews added 19 as the Houston Rockets extended their winning streak to seven and one of the in form teams in the NBA. Although James Harden had 25 points for the Nets, NBA leading scorer Kevin Durant and LaMarcus Aldridge both sat out for this match, Cam Thomas had 18 points for Brooklyn and Mills added 12 points. The loss snapped a six-game road winning streak for the Nets, whose nine road wins are tied with the Suns for most in the NBA. With this result Nets still remained on top of the Eastern Conference with a record of 17-8.

“The adversity that we went through prior to this point has made it even sweeter,'' coach Stephen Silas said. ''We're feeling pretty good about ourselves.'

The Miami Heat finally snapped their losing streak with a 113-104 victory over the Milwaukee Bucks. Caleb Martin scored a career-high 28 points, he shot 9 of 12 from the field, including 6 for 8 on 3-pointers, as the Heat tied a franchise record with 22 3s against the defending NBA champions. Kyle Lowry had 22 points and 13 assists, and Max Strus scored all 16 of his points in the fourth quarter for Miami, which snapped a three-game home losing streak. For the Bucks Jrue Holiday scored 27 points and Khris Middleton finished with 20 for the Bucks. Two-time MVP Giannis Antetokounmpo had 15 points. With this result the Heat’s improved their record to 15-11 and are currently in 4th position and as for the Bucks their record stands at 16-10.

The fixtures for tomorrow are;