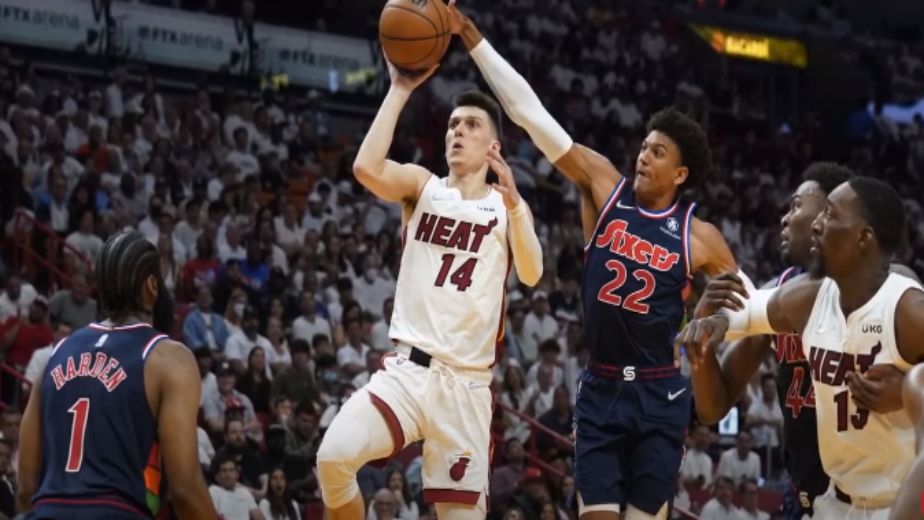 (Basketball series) The Miami Heat became the first team to qualify for the Eastern Conference final when they beat the Philadelphia 76ers 99-90 to clinch the series 4-2. For the Heat, Butler scored 32 points as Max Strus had 20 points and 11 rebounds, PJ Tucker and Bam Adebayo both had 10 points. For the Sixers, Embiid, the NBA scoring champion, had no significant help and scored 20 points with 12 rebounds on 7-of-24 shooting as Tersey Maxey also had 20 points after James Harden had an abysmal game again. With this result the Miami Heats reached their first conference finals since 2013 and the first LeBron-less conference since 2008.

''I think he's one of the ultimate competitors in this profession,'' coach Erik Spoelstra said. ''He was brilliant all series long. The challenges only get tougher here. He saw there was an opportunity to end this tonight and he wasn't going to let this get to seven.''

''I'm sure since we got him, everybody expected the Houston James Harden,'' Embiid said. ''But that's not who he is anymore.''

''I came to the conclusion at the end of this game that we were not good enough to beat Miami,'' Rivers said

''I don't worry about my job. I think I do a terrific job. If you don't, then you should write it,'' Rivers said. ''Because I worked my butt off to get this team here. When I first got here, no one picked us to be anywhere. Again this year, the same thing. If that's how anyone feels, write it. I'm going to feel secure about it.''

“Joel, my guy. My brother. Who I'd pick for MVP,'' Butler said. ''It feels good to beat him. I'm not going to lie to you. I've got a lot of love for this city. A lot of love for guys in that locker room. So any time you get to beat a former team, it's special.''

The Dallas Mavericks levelled up the series with a 113-86 victory over the Phoenix Suns as they will have to play game 7 to find a winner. For the Mavericks, Doncic scored 33 points as Reggie Bullock scored 19 points for Dallas, going 5 of 11 from 3-point range and Jalen Brunson added 18, Spencer Dinwiddie had a series-high 15, all on 3s (5 of 7). For the Suns, Booker scored 19 points but was shut out from 3-point range (0 of 4) while going 6 of 17. Deandre Ayton had 21 points and 11 rebounds, and Paul added 13 points. With this result the series is tied at 3-3 as both teams will travel to Phoenix to play game 7 on the 15th.

''I don't know if he was playing as if he was trying to do something different,'' Kidd said. ''I think he enjoys the moment. You guys have seen a little bit longer than I have up close. He's not afraid of the stage. I think you guys call it the first time winning an elimination game. He'll be in this situation a long, long time.''

''I don't have enough time to talk about everything that's eating at me,'' coach Monty Williams said. ''I didn't think we understood the desperation they were going to play with. Couple that with the turnovers that we had tonight, it's a recipe for what we just got.''

''Greatest two words in sports,'' Booker said. ''I'm excited to feel the energy. I'm excited to be a part of it. It's a great opportunity.''

''I think we won this game on the defensive end,'' Doncic said. ''We've got another game. That's fun. It's the playoffs, and we're going to give our energy.''

Also read: NBA: Suns blowout the Mavericks in game 5 while the Heat win