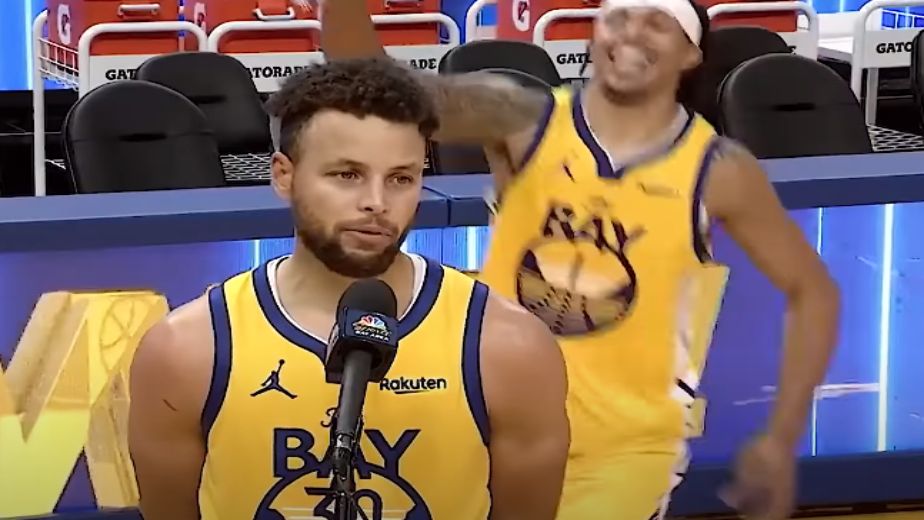 (Basketball news) Steph Curry scored 20 off his 40 points in the fourth quarter as the Warriors rallied back from a 13 point deficit to win 104-89 against the Cleveland Cavaliers. Curry made 8 of the 12 shots, including 4 of seven 3 pointers, this outburst helped Warriors outscore the Cavaliers 36-8 in the final quarter. The two time MVP increased his scoring average to 29.5 points, six assists and four rebounds this season. Nemanja Bjelica added 14 points and Andrew Wiggins added 12 points which helped them improve their record to 13-2 in Western Conference. Darius Garland scored a season high 25 points as the injury plagued Cavaliers dropped to 9-8 in the Eastern Conference

“With Steph on the floor, you always have a chance,” Golden State coach Steve Kerr said. ''He's one of the greatest players in the history of the game and he is the greatest 3-point shooter of all-time. He's fearless and always capable of catching fire like that.''

It was amazing to watch our energy in the fourth, and I had the best vantage point in the house,'' Curry said. ''We're pretty good at wearing teams down with our defense.''

Stephen Curry is a hell of a basketball player,'' Cleveland coach J.B. Bickerstaff said. ''The shots he was making weren't easy, but obviously, he's got the skill-set to make them and Draymond knows how to get him open. They're the best team in the league right now for a reason.''.

Miami Heat beat the in-form Washington Wizards 112-97 for their fourth consecutive victory. Jimmy Butler scored 32 points, as he shot 11 of 19 from the field and made all 10 free throws in his second consecutive outing over 30 points. Bam Adebayo returned from a two-game absence because of a bruised left knee and added 20 points, Gabe Vincent had 18 points and P.J. Tucker 15. The Heat improved to 11-5 in the Eastern Conference. For the Wizards Bradley Beal scored 30 points and Kyle Kuzma added 19 points as the Wizards fell to their second consecutive loss and their record dropped to 10-5. Guard Tyler Herro, Miami's second-leader scorer, sat out because of a bruised right wrist. The Wizards rested third-leading scorer Spencer Dinwiddie.

''Everybody had their antennas up when we were No. 1 in the East,'' Beal said. ''The biggest thing I like about our team is our fight. We don't give up.''

“Look, Washington has really established a way of playing,'' Miami coach Erik Spoelstra said. ''They're a very good defensive team. You have to really be intentional with your offense, you have to do things with pace, your spacing has to be right on and you have to share the ball.''

LA Clippers lose 120-108 to the Memphis Grizzlies as Ja Morant scored 17 of his 28-points in a third-quarter to rally the Memphis Grizzlies. Dillon Brooks and Jaren Jackson Jr. added 18 points each, and Desmond Bane had 16. Brandon Clarke finished with 14 points, 10 of them in the fourth quarter. Memphis held the lead for the majority of the match but Morant provided an offensive brust which stretched their advantage to 20 points. Paul George led the Clippers scoring with 23 points and six assists, Reggie Jackson added 18 as Luke Kennard chipped in with 15 points. With this result the Clippers record falls to 9-6 as the Grizzlies improve their record to 8-7 in the Western Conference.

''We were just active on defense. When they had their runs, we slacked off,'' Brooks said. ''We just got steals. Ran down and made plays for each other. When we are making plays for each other, you see what the end result is. We're all happy and getting ready for the next game.''

''I feel like it is tougher for a defense to guard me,'' said Morant, who worked in the offseason on his 3-point shooting. ''I can knock down the 3, knock down the midrange pull up, get to my floater or get all the way to the rack.''

Also read: NBA: Giannis drops 47 points against Lakers as Warriors continued their astounding start with a victory over the Nets