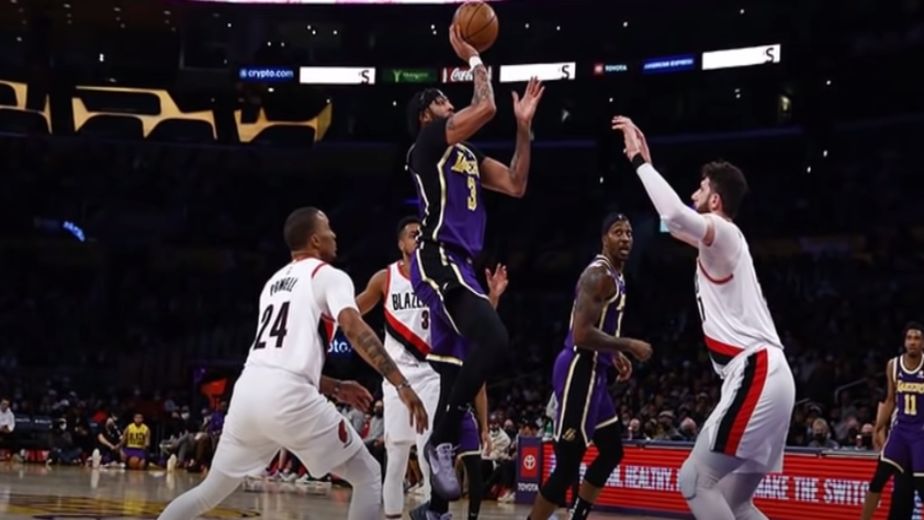 (Basketball news) Lakers snapped out of their losing streak after they won 99-94 against the Portland Trailblazers. For the Lakers, Anthony Davis scored 19 of his 30 points in the final 12 minutes as he also had 15 rebounds, including seven in the fourth, It is the third time this season that he has had at least 30 points and 15 rebounds in a game Carmelo Anthony added 24 as they were missing LeBron James for the fourth consecutive game due to left knee soreness. For the Trailblazers, Powell led them with 30 points and tied a season high with five 3-pointers. Anfernee Simons added 19 points while Jusuf Nurkic had a double-double with 16 points and 13 rebounds. With this result the Lakers stayed in 9th in the Western Conference table with a record of 25-27.

''I just tried to come out with the mindset of ending the streak,'' said Davis, who is averaging 29.3 points over his last three games. ''We have to play with some urgency. We just fought hard tonight. It was a great game for us.''

''He had some great sequences of grabbing rebounds in traffic,'' coach Frank Vogel said. ''Tonight was about mental toughness and making enough plays and shots. It was a hell of a game by Anthony.''

''We had a couple breakdowns. We had some good stops but gave them second and third-chance opportunities,'' said Powell, who has scored at least 30 points twice this season.

''We did a good job of fighting back and staying with it, but there were some big moments where we couldn't get over the hump,'' coach Chauncey Billups said.

The Brooklyn Nets lost their sixth consecutive match in a row as they lost 112-101 against the Sacramento Kings. For the Kings, Tyrese Haliburton scored seven of his 12 points in the fourth quarter on his way to a double-double,as Harrison Barnes scored 19 points and Haliburton had 11 assists to help the Kings stop a seven-game skid. Buddy Hield and Davion Mitchell scored 18 apiece. For the Nets, Nic Claxton had a career-high 23 points and grabbed 11 rebounds for Brooklyn. James Johnson added 18 points. James Harden, who has been nursing a sore right hand and a hamstring injury, was held to four points, his fewest since scoring five against the Chicago Bulls on May 15, 2021. The Nets' skid is their longest since a seven-game slide Dec. 26, 2019, to Jan. 7, 2020. Brooklyn as they haven't won since beating the Spurs in San Antonio on Jan. 21.With this result the Nets slumped down to 6th in the Eastern Conference table with a record of 29-22.

''There's no concern,'' Harden said. ''We don't have our entire team and this is happening to us. We're just trying to figure out what works best, what guys fit, what guys don't. Hopefully after the break we can get our whole roster and start making strides in the right direction.''

''This trip our objective is to get better. The first two games and the first half tonight we were getting better,'' Nash said. ''We didn't contain the ball enough in the second half and we didn't make plays.''

''It felt like we were on a string as a unit,'' Haliburton said. ''We were communicating together and that helped us a lot. That's why good things happened for us.''

''I just thought it was a really good defensive effort,'' Kings interim coach Alvin Gentry said. ''When you can hold that team to (101) points . I really liked the activity in the fourth quarter on the defensive end.''