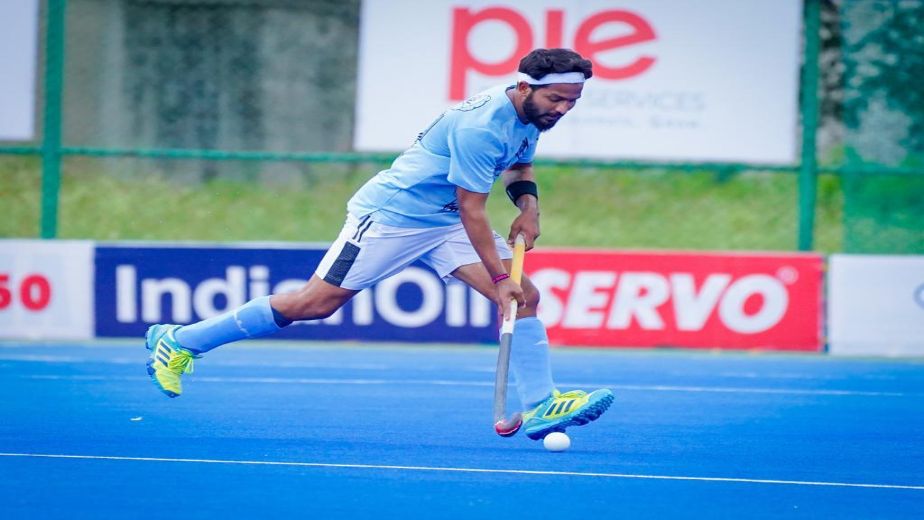 Talented striker Yuvraj Walmiki is an inspirational figure in Indian hockey. The prince of Indian hockey’s journey is full of ups and downs, hard work, dedication and the courage to achieve his dreams.

In an exclusive interview with SPOGO, we spoke to the Mumbai based hockey player about his journey so far, his inspiration, the challenges hockey players face, playing in the German Hockey League and his plans for the future.

When did you start playing hockey and how much of an influence did your first coach Mr. Merzaban Patel have on your journey?

The first time I stepped on a hockey field was in the year 1999 through one of my friends Boon D’Souza who introduced me to hockey. My first coach Mr. Merzaban Patel who we fondly call ‘Bawa’ changed my life. The way he handled me and his belief in me was incredible because once a player picks up a hockey stick, just learning how to dribble takes about 6-7 months. I feel I was so blessed or probably talented because I learnt dribbling in 15-20 days and since then, Bawa used to tell me that I have a bright future and will definitely represent the country. More than his influence, it was his belief that I will make it in hockey one day and I consider myself to be a very blessed and proud student of Mr. Merzaban Patel.

Who are the players you looked up to while growing up? Who has been the best player you have played against?

Hockey is a team sport but the one I looked up to while growing up was none other than Mr. Dhanraj Pillay, the living legend of Indian hockey. Any aspiring hockey player who picks up a stick wants to play like him. He played a major role and I always wanted to wear the number 9 because Dhanraj Pillay used to wear that number. I was very blessed and fortunate to play alongside him at Air India from 2007 to 2012. He has been one of the icons of Indian sports and played a major role influencing me. I believe that it’s because of him and his coaching, the way he helped me right from 1999 till date that I consider him my coach, mentor, idol and my everything. With regards to the best player I have played against, every player has been a legend in their own way so I can’t name one.

How do you prepare yourself before a big game? How do you cope with setbacks such as injuries or defeats?

Injuries are a part of any sport, you can’t cry about it. Hockey involves more body contact, therefore injuries are more frequent. I’ve been named the most injured player and that’s probably because I play as a striker, it’s a position where there are higher chances of injuries. You need to be very fit to play the game for 70 minutes so it’s tough to suffer from injuries but the hardest part is not the injury itself but making a comeback which requires tremendous effort, concentration and sacrifices. I’ve missed out on two Olympic games, the 2012 London Olympics and the 2016 Rio Olympics, so it’s tough but I’ve realized that you don’t get everything in life. You win some and you lose some and you’ll get whatever you’re destined for. Despite everything, I feel very blessed for all that I have achieved so far and it’s important to be grateful. Before any game I play, whether it’s domestic or International I make sure that I call my family 2-3 hours before the match. After that I put my phone on flight mode and listen to music because it pushes me to do better or I watch some motivational videos which helps me be in the right mindset when I step onto the field. I don’t have any particular routine but I avoid meeting people including my friends and players from the opponent team. Till date I maintain that the fun is reserved for after the match but maintaining focus is very important to me before the match.

Who have been your biggest supporters in your journey?

My parents have been undoubtedly the biggest supporters in my journey. I don’t believe in God but if there is any God for me it's my family. I would always say to any youngster that don’t ever try to go away from your parents, because it’s important to remember that when you’re nothing they are still with you and when you become something they will still be there. My parents have been a real support ever since I started playing and they will always continue to do so.

What are the challenges Indian hockey players face? Do they receive adequate support from the government?

I think every sports person feels challenges at every step and every minute of their lives in some way or another. Yes, there is support from the government but there is definitely room for improvement. I always appeal to the government to support players before they go for tournaments in terms of gym, diet, access to physiotherapists, trainers and equipment. It becomes easier to prepare for the big competitions and win more medals at the Olympics and the World Cups. It’s more important to use funds that will help players prepare for tournaments rather than using the funds to give rewards once they have achieved something.

I think it starts from the grassroots, we have to concentrate more on the school level. If we really want to be a champion nation, we need to have more players taking up hockey which would start from school and then move on to colleges, universities, state and then the national team. I think it all starts from school and it's very important. Speaking of where the game is lacking, I think it's the audiences that need to start promoting the game in some way. We need to support the games like hockey and kabaddi which are doing fantastically well. Only few people know that India ranks 4th in the world in hockey and I think that's a big achievement for the hockey players and the country as well. It doesn't lack anywhere, it's just that people need to come out and support the game.

You have played in the German Hockey League, what has that experience been like?

Playing in the German Hockey League has been a wonderful experience for 8 years. One thing I say very proudly is that Germany has made me a better player. The training was very modern and the facilities were way ahead from a country like ours. In fact, European countries are way ahead of Asia in terms of coaching and supporting the game. Germany has always been very very special and I have done well every time I have played there. I have learnt a lot of things which I make sure to share with the youngsters, the future stars of the states and the country when I come back to Mumbai. Yes, Germany is wonderful.

How different is the style of hockey that is played in India compared to abroad?

I think every country has a different set of format to play hockey. Europeans play in a different pattern while India plays with a different pattern. With foreign coaches coming to Indian teams, they have started to implement a foreign style as well. I personally feel until and unless we don't forget the Indian flavour, as in the skill set, the kind of talent the players possessed and even do now, like the ability to dodge 2-3 players, we can not only pick up the European format or the pattern of play but also implement it with Indian skills. I think it will benefit the team a lot.

Hockey has changed your life, how do you give back to the sport you love?

Hockey is my bread and butter and I’ve been giving back for so many years. I have never said this because I don’t like to, but I have adopted a village in Sangam Nagar where I take care of almost 70 to 80 kids. I personally believe that if you do something, you shouldn't talk about it. Don't speak of the charities you make, let other people do it. I have kept things low key.

What are your plans for the future?

My future plan is to open up an academy in Mumbai and support underprivileged children to provide them with the best of the education and make sure they play outdoor sports. It doesn't matter if they play hockey or any other sport. They have to play a sport because it will keep them away from dirty habits. Even if they don't go on to represent the country at least they will lead a very disciplined and healthy life and this is the way I want to give back to the society and to the game that has given me so much name, fame and everything. These are plans and in a few years you'll definitely see a very good academy set up very soon.