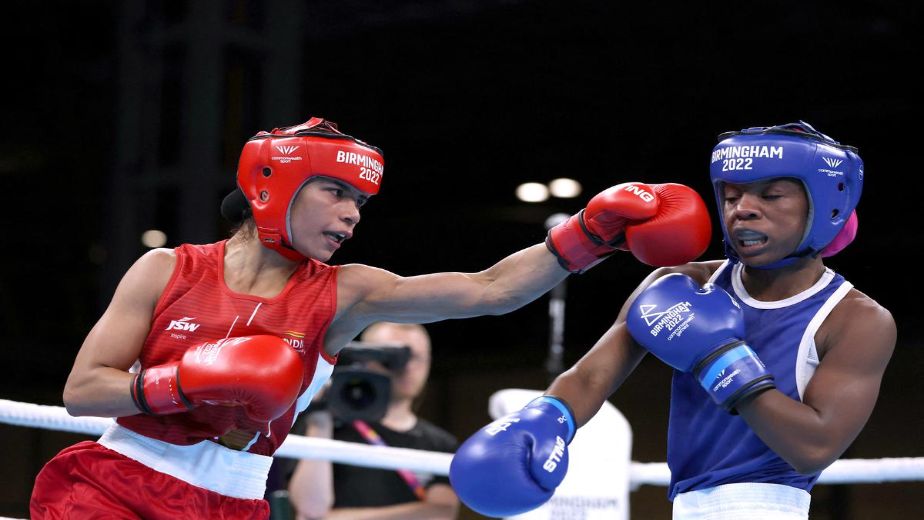 Zareen (56kg) knocked out Helena Ismael Bagao of Mozambique to storm into the last eight round of the women's lightweight category winning by RSC (Referee stopping contest).

Sagar (92kg), who is making his India debut, put up a power-packed performance to win by 5-0 verdict against Cameroon's Maxime Yegnong Njieyo.

Thapa lost 1-4 to world championship bronze medallist Reese Lynch of Scotland to make a disappointing exit from the Games while Sumit went down to Australia's Callum Peters by a 0-5 unanimous verdict in the middleweight pre-quarterfinals.

The first Indian pugilist to take the ring on the day, Zareen was no match for her young opponent as she dominated the bout from start to finish.

The Indian used her rich experience to unsettle Bagao from the onset. She came out attacking and used her combinations of left and right punches to overpower her opponent.

Zareen landed clean punches on her opponent's face in the final round to completely shock her, forcing the referee to call off the tie with 48 seconds remaining.

Zareen will next face reigning Commonwealth Games bronze medallist Troy Garton of New Zealand in the quarterfinals, where a win will secure her a podium finish.

Zareen said she won't settle for anything less than a gold from the event.

"I am feeling happy that I won my first bout and I am looking forward to performing well in the next rounds. I am just one fight away from a medal but I am looking to win gold from here," she said after her bout.

Thapa started on a bright note, clearly outclassing his opponent in the opening round.

But overconfidence and lack of focus cost Thapa dearly in the next two rounds as the Scot used his height and long reach to land clear punches.

Going into the third and final round, Thapa was still in the contest but Lynch took his opponent by surprise with his aggressive approach as the Indian had no option but to defend.

Eventually, the result deservingly turned in favour of Lynch as he was the far better boxer in the contest.

Like Thapa, debutant Sumit also led the bout after the first round but the Indian's inexperience did him in the final two rounds.